A few weeks back, the 4th and 5th students at St. Anthony and Our Lady of Guadalupe Catholic Schools in Dubuque were treated to high energy, highly interactive presentations from Water Rocks! … but these presentations were particularly special in that they featured a couple of local rock stars in the conservation world!

The Back Story:
As our Water Rocks! visit to St. Anthony & OLG was approaching, I realized it was going to be a pretty tight week for our small staff, and I’d likely be handling the event solo. However, situations like this also present the opportunity to partner with other conservation stakeholders across the state, and even better when it’s someone that’s already been trained on Water Rocks! materials.

Bev Wagner, with the Dubuque Metropolitan Area Solid Waste Agency, has participated in multiple Water Rocks! workshops in the past, including the Water Rocks! Summit, so she has been trained on a variety of the unique hands-on games and activities that we utilize in the classroom. Knowing I was headed to Dubuque, I knew exactly who to call upon!

I connected with Bev right away to see if she might be available to help out and co-present with me, and within a matter of minutes, she responded, “I am available the whole day and would love to help out.” With a smiley face. :)

A few days in advance of my trip to Dubuque, Bev contacted me and asked if her student helper, Ruth, an education student at Loras College, could also come and help out. YES, absolutely! 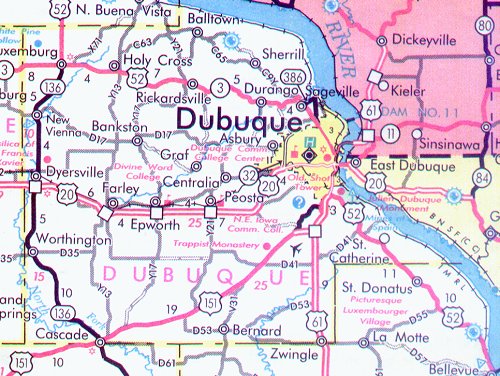 Fast Forward to Game Day:
Bev, Ruth and I met 30 minutes ahead of time, getting everything loaded into the classroom, set up for the interactive presentation, and we quickly talked through the content. Our topic of the day was The Wonderful World of Wetlands (read more about it in our earlier blog post Wetlands Outreach: Tools of the Trade). The first class of the day, I took the lead in presenting; Bev and Ruth observed while also actively assisting with handing out materials to the students, awarding prizes, etc.

With one class under our belts, Bev and Ruth were both feeling more comfortable with the content, so from that point forward, we tag-teamed the entire 50-minute presentation. We started off with an audio listening tour of wetlands, describing the creatures that live there and what the environment might look like. Ruth showed the class an image of wetlands as we connected that with the listening field trip the students had just gone on. Bev guided the students in talking through all of the different names that wetlands go by, calling on students to share one of the names and then saying it out loud together as a class. 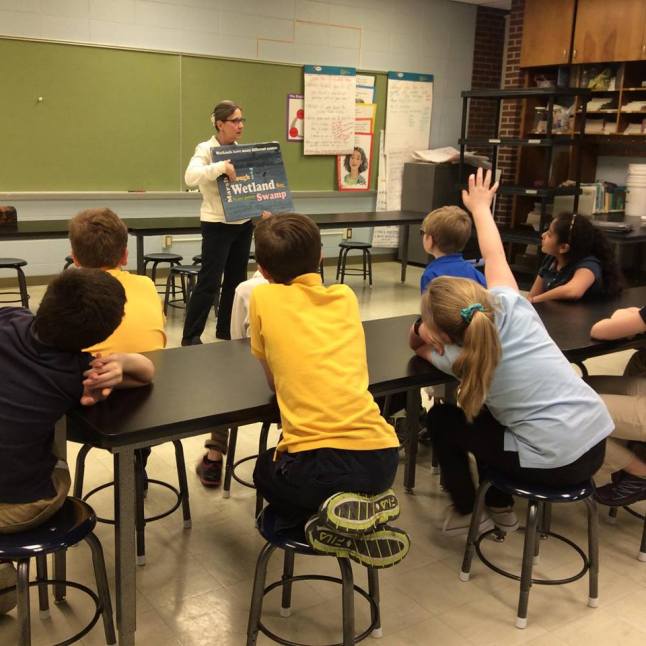 We then jumped in with the characteristics that make wetlands unique (hydric soils, presence of water, and vegetation). That was followed by the 3 jobs that wetlands perform – there were 3 of us, so each one took a job (and its corresponding prop) and explained it to the class!  I started off with a filter (water purification), Ruth followed with a sponge (water storage), and Bev concluded with the house (representing habitat).

Bev and Ruth led the classes in discussing the amazing diversity of plants, animals, microorganisms, and other life found in wetlands – as much biodiversity in Iowa’s wetlands as is found in the Amazon rainforest!  We talked about how wetlands are especially important to migratory creatures – birds and butterflies.

Students then got the opportunity to summon their inner birds for an intense game of Habitat Hopscotch!  Bev was the keeper of the (infamous) “situation jar” which housed different situations that impacted wetlands, while Ruth and I acted as the “bird police,” ensuring that students were landing in the correct squares and sending them to bird prison when they stepped out. Being a Catholic school, one of the 4th grade students asked if instead of bird prison, could we call it “bird heaven”? Priceless! 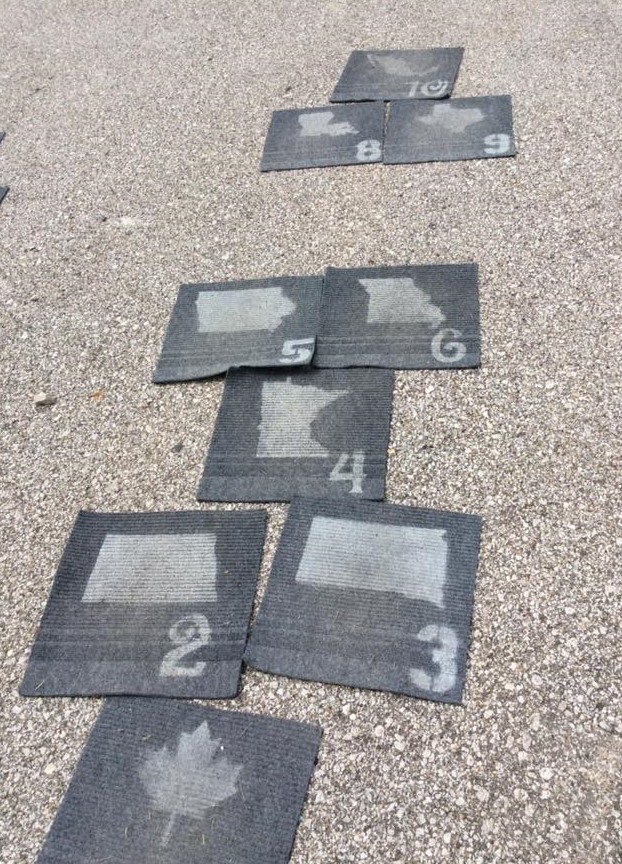 After 5-6 rousing rounds of Habitat Hopscotch, it was pretty clear that the loss of wetlands has a serious impact on migratory birds. Iowa has lost ~90% of its original wetlands, so that means protecting the remaining 10% of wetlands is critically important!

One 5th grade student responded, “I think we all need to #(HASHTAG) Save The Wetlands!”

It was then time to move on to our other big game, Wetlands BINGO!  Again, Bev and Ruth were awesome helpers. Bev was our official BINGO caller, while Ruth and I called out the names of corresponding creatures found in wetlands. Each one of us chipped in with fun facts about the different creatures, as well as sharing which ones were our favorites. When a student got a BINGO, we worked together to come up with a simple trivia question to test their knowledge before awarding a prize from our treasure chest. The 50 minutes with each class passes by so quickly with all the games and hands-on activities involved! 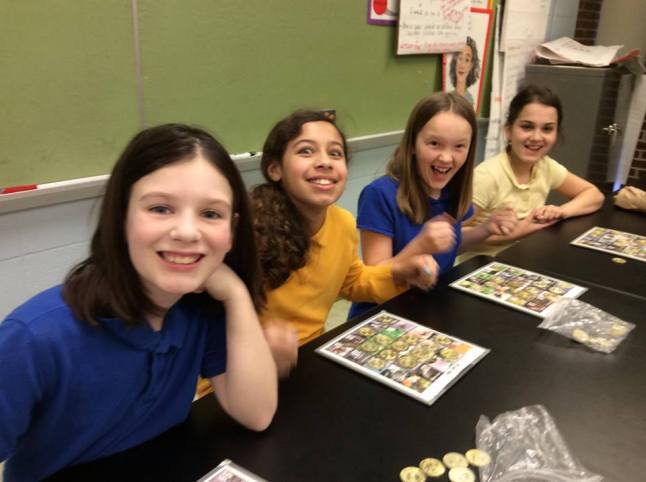 By the end of the day, we had presented to five different classes of students, and I’m pleased to say that not only did the students have a whole lot of fun, they also learned a whole lot about wetland ecosystems and their importance on our landscape. Further, this school visit was a great success in terms of the collaborative teaching effort – a win-win all around!  Bev and Ruth were awesome to work with, and it was fantastic to have local conservation personnel involved helping out with Water Rocks! as well as connecting with the local teachers and students. We look forward to more opportunities like this in the future. All in all, it was a great success —  one of those days when you go home really feeling like you made a difference. And that’s a great feeling.

Today’s guest blogger is Iowa Learning Farms/Water Rocks! student intern Megan Koppenhafer. Koppenhafer is a second year intern to our program and is entering her senior year at Iowa State University.  She is double majoring in Environmental Science and Community and Regional Planning.  Growing up on a farm, she spent a lot of childhood days in the outdoors, and she is really thankful for having a summer job that also allows her to spend much of her working time outdoors!

On Tuesday May 24, 2016 we had the pleasure of traveling to the beautiful Swan Lake State Park in Carroll, Iowa for a very unique outdoor classroom experience. Anjanette Treadway is a program coordinator with Carroll County Iowa State University Extension and Outreach in Carroll County. She attended the Water Rocks Teacher Summit this past December and quickly worked to integrate the new lessons into the classrooms of Adams Elementary 3rd graders. Anjanette loved the idea of the Water Rocks! program because it was fun and it adhered to core classroom standards.

“We are always looking to better align our programs with the core classroom standards and this program seemed to provide the perfect tools.”

Anjanette spent the week leading up to the outdoor classroom viewing the Water Rocks! music videos and discussing the concepts of Wetlands and Watersheds and Biodiversity, oh my!

“They really loved the Old McDonald song but I had to keep reminding them to listen to the whole song and look at their song lyric packets before singing along.”

Water Rocks! often participates in outdoors classrooms that invite a variety of programs and topics to staff different stations through which students rotate. This outdoor classroom featured four of our own lessons! Students rotated between the Wonderful World of Wetlands, We All Live in a Watershed, Dig into Soil, and the Trees, Bees, and Biodiversity modules. Teachers also led various nature activities in between the lessons we taught.

Our lessons focused on the hands-on activities that go with each lesson. Wonderful World of Wetlands features hopscotch and bingo: 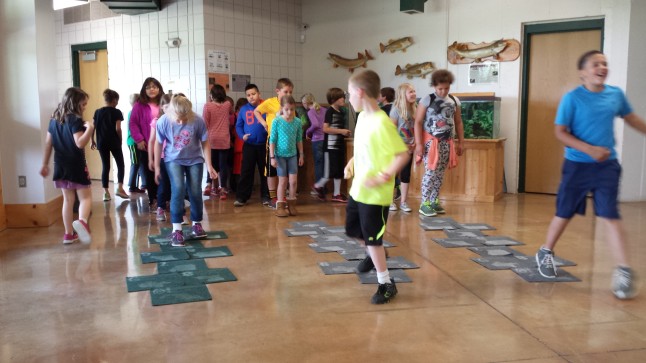 We All Live in a Watershed uses an activity that displays the relationship between what we do to the land and the pollutants that result from our actions: 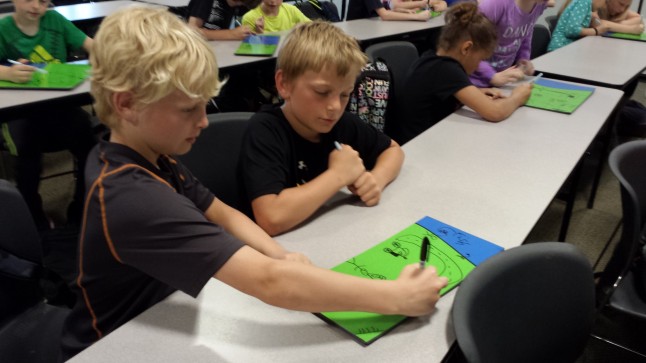 Dig into Soil includes a few sorting activities and the amazing RAINFALL SIMULATOR: 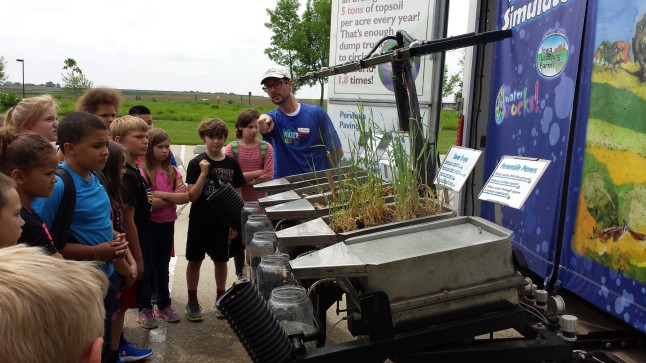 And finally, Trees, Bees and Biodiversity leads kids through a few fun, suspenseful activities that involve cards and a variation on Jenga!

Anjanette believes strongly in what the Water Rocks! curriculum includes, and it shows.  Her students clearly soaked up the main concepts she presented in the classroom the week before the outdoor classroom.

“The main idea I wanted to convey was that we just have to be so careful about what we put on the ground because it doesn’t just affect us. I think they got that. On the bus ride to the event they passed a sign for the Middle Raccoon River and the students called out ‘Oh! That’s the Adams Elementary watershed!’. They understood that that’s where the water from their school would go.”

A big thank you to Anjanette Treadway and Adams Elementary School for an excellent contribution to the Water Rocks! Program. We had a great time and hope you did too!

What do JENGA, musical chairs, carpet squares, competition, and creativity all have in common? These are all key ingredients that come together to help educate and inspire the next generation on water, soil, and natural resources, thanks to the Water Rocks! youth outreach program.

Over the years, we’ve found that school visits are most effective when we work with one individual class at a time – this offers the greatest opportunity for hands-on, interactive activities, as well as questions and dialogue. And this “Trees, Bees, and Biodiversity” program is chock full of hands-on, interactive games and activities!

Here are a few snapshots to highlight these school visits:

We’re all about building vocabulary in each of our classroom lessons! 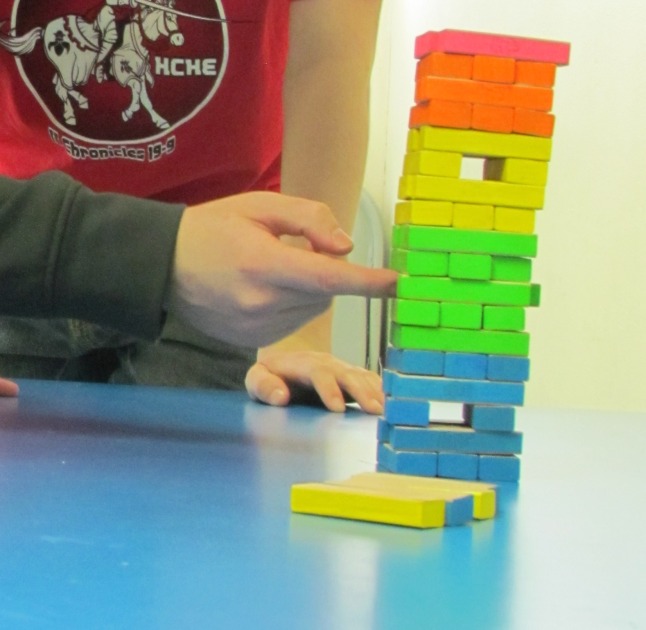 Biodiversity JENGA helps students see the interwoven connections between different living creatures…  the colored blocks correspond to the different trophic levels shown in the pyramid above. Water Rocks! team members draw a “situation” from the “situation jar,” and that lets the students know which block(s) must be removed each turn. Two teams are competing head-to-head to keep their towers standing as long as possible. As one 5th grader this week put it, “This is really intense!” 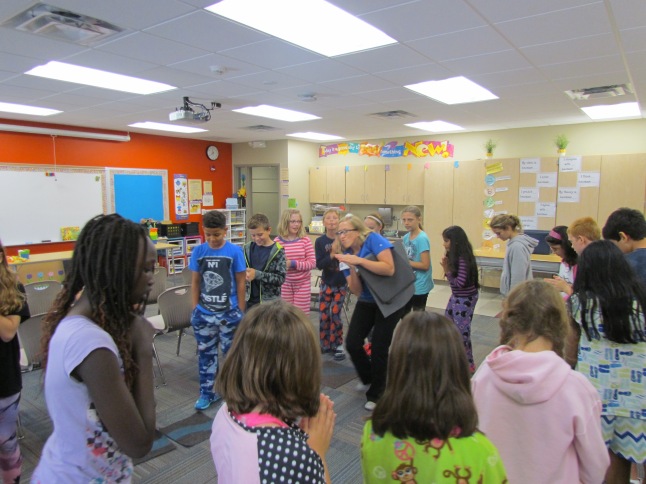 Woodland Hills (Waukee) 5th graders join in a rousing game of Musical Oxbows!  It’s like Musical Chairs, but in this version of the game, students become Topeka Shiners (native fish to Iowa) and swim around an oxbow while the music is playing. Ann encourages them to “summon their inner fish” while Liz runs the boombox. 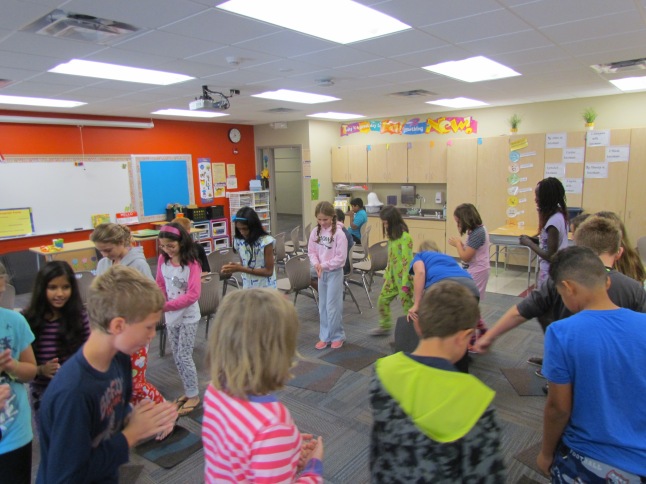 Once the music stops, find a spot in the oxbow, or you’re out!  The game gets a bit tougher as “situations” are drawn from the “situation jar” and the oxbow shrinks… it’s survival of the fittest!

Check out the 2015 Schedule of Events to see where we’re headed next. While our fall schedule is closed, we are currently accepting requests for second semester school visits, over the months of February – May. Learn more about our offerings on the Classroom Visits webpage, and then hop on over to Request a Visit!